Note: A 2-disc 50th Anniversary DVD edition of this title is also available. Universal even included it in their Masterpiece Collection set. 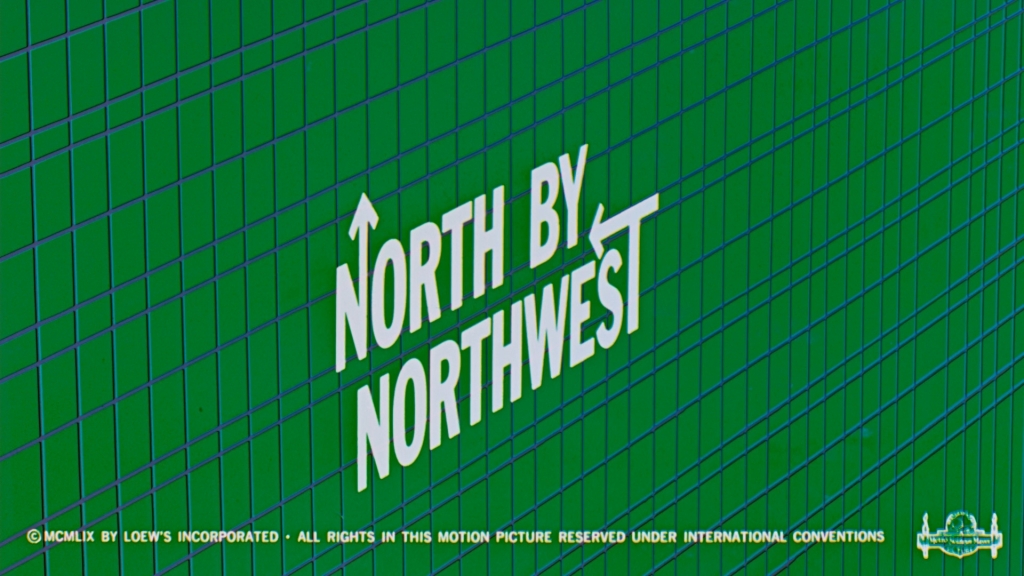 “It’s the American Thirty-Nine Steps. I’d thought about it for a long time. It’s a fantasy. The whole film is epitomized in the title — there is no such thing as north-by-northwest on the compass. The area in which we get near to the free abstract in movie making is the free use of fantasy, which is what I deal in. I don’t deal in that slice-of-life stuff.” —Alfred Hitchcock

Alfred Hitchcock’s 1959 ‘fantasy’ is a thrill from beginning to end. It is the director’s longest film, but one never feels the time pass. North by Northwest is every bit as enjoyable today as it was 54 years ago. It continues to attract admiration from audiences, and many people consider it to be Hitchcock’s best film. This is highly debatable, but it must be said that North by Northwest is certainly one of his most enjoyable efforts. AFI continues to include it in many of their “best” lists, and its legacy does not seem to be fading.

Warner Brothers has released two different packages for this particular disc, and the difference between the two lies solely in their casing. The normal Blu-ray release packages the disc in the standard blue plastic case, and the 50th Anniversary Edition packages the disk in Digi-book. This special edition has an extremely classy presentation and is priced at an estimated ten dollars higher than the regular release. It is slightly skimpy in actual content, but one must admit that its 44 pages are beautifully rendered. 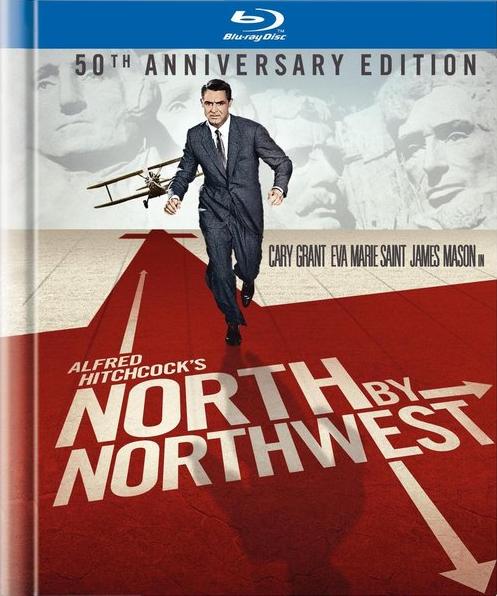 The film begins playing when the disc is put into the player, but Warner Brothers does offer a menu that can be accessed at any time.

The menu itself is rather soft and grainy and does not hint at the quality of the actual film’s visual presentation on the disc.

It might not be possible to adequately put into words just how amazing this 8K restoration transfer looks in high definition. Warner Brothers should be proud of this release and Hitchcock fans and anyone else who has a love for classic cinema should feel lucky to own it. The level of detail in this high definition transfer is truly astonishing. This film looks better than a few of the transfers of more recent films I have seen. The studio spared no expense on bringing us a fantastic picture. 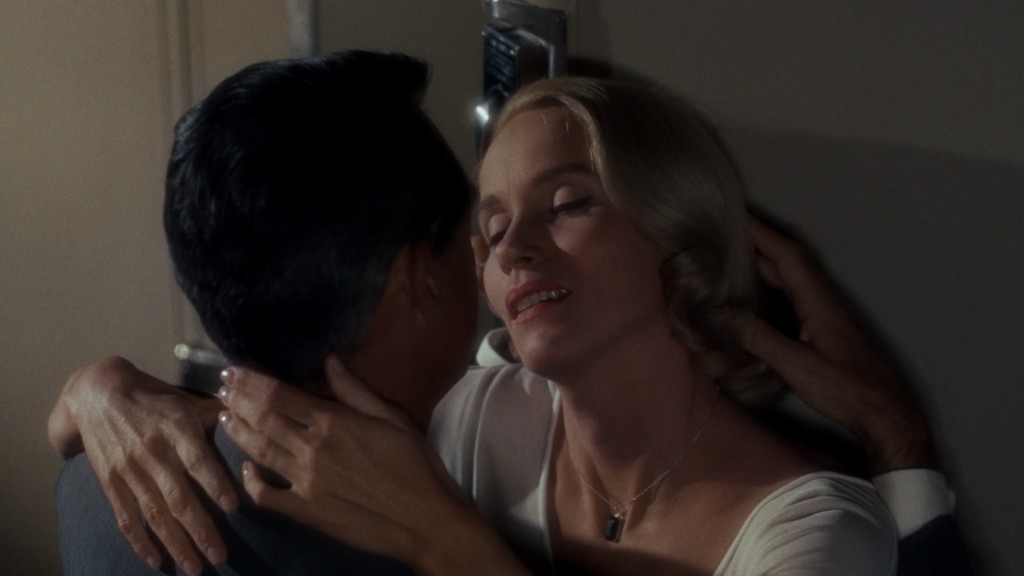 The picture is presented in an aspect ratio of 1.78:1 and is actually closer to the original 1.66:1 VistaVision ratio than the film’s original DVD release. The color on this transfer seems richer and more cinematic. I would imagine that this is very similar to how the image looked in the cinemas. There seems to be absolutely no print damage. This might not be quite as sharp as a more recent film, but I can assure you that North by Northwest has never looked sharper than it does in this release. Even more amazingly, this seems to have been achieved without the use of any artificial edge enhancement. There is an appropriate amount of grain for a film of this era, but it is an extremely clean image.  It is simply gorgeous. 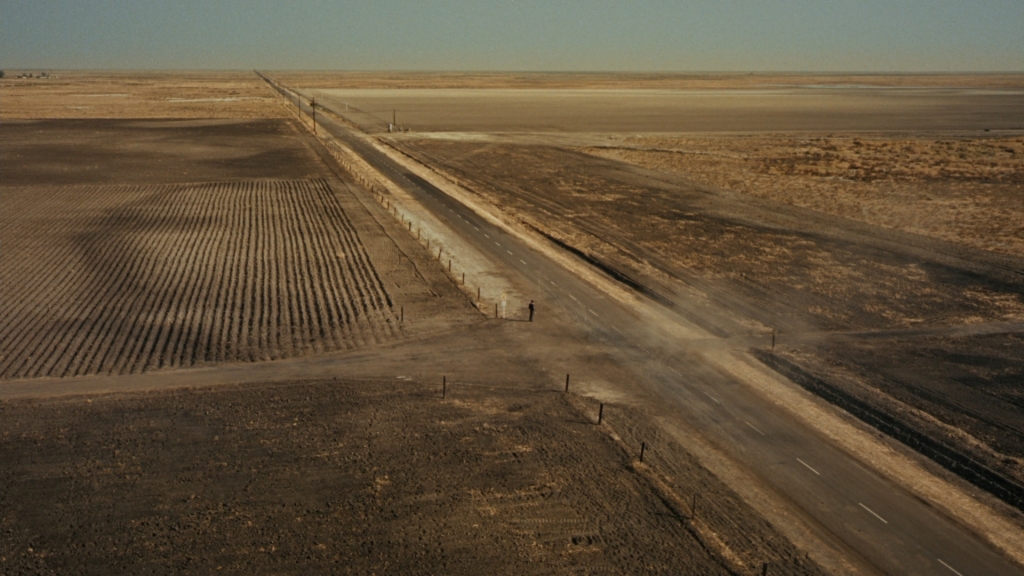 Purists might find fault with the sound options on this release. A TrueHD 5.1 audio mix has been created for this release and the disc does not seem to contain its original soundtrack. It is unfortunate that this track is not included in addition to this new 5.1 high definition mix, but I have no complaints about this new mix. It is a modest remix that retains the essence of the original soundtrack. It is mixed at a low volume and it might become necessary to raise the volume on your television set, but it is a very nice experience. Dialogue is consistently clear and well prioritized. It is delivered mainly through the center channels but has presence in the left and right speakers as well. Bernard Herrmann’s fabulous score has never sounded better than it is presented here and there are some wonderful panning effects during the crop dusting sequence that enhance the viewing experience without going overboard. This is a subtle mix that suits the film nicely. 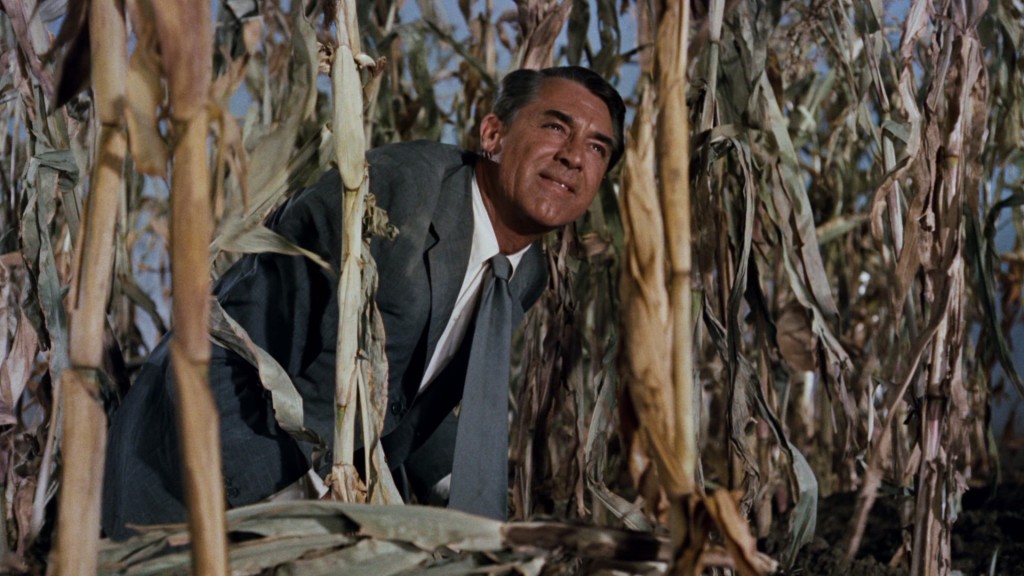 Warner Brothers offers a rather fabulous selection of special features. Even contemporary films rarely receive so many excellent features on home video. Many of these selections might have been preferable in high definition and included on a second disc (although a few of these features are likely from standard definition sources). However, this is only a small complaint.

This is an extremely interesting commentary by screenwriter Ernest Lehman. It is slightly slow getting started, but it contains a wealth of information that fans of the film will consider priceless. Some of the most fascinating moments of the commentary have less to do with factual information and a bit more to do with ego and conceit. There are moments in the film where the writer seems almost bitter that he has not received more credit for the film’s success. This was recorded for original DVD release years ago and anyone who owns any of the DVD versions of the film will have heard it already.

This feature is essential for anyone who would like to experience Herrmann’s score for North by Northwest without the distraction of other elements of the soundtrack. It illuminates Herrmann’s profound contribution to the film perfectly. This track is a carry over from the original DVD release of the film.

“Destination Hitchcock: The Making of North by Northwest” — (39:27)

This is a wonderful “Making of” documentary hosted by Eva Marie Saint. It is fairly comprehensive and always interesting. This feature is another carry over from the film’s original DVD release.

Contemporary directors and scholars discuss North by Northwest giving their impressions of the film along with a few details about production and where the film fits into the Hitchcock canon as a whole. This is the weakest of the documentaries on the disc, but it is consistently enjoyable and interesting.

This documentary utilizes interesting footage from a documentary made in the 1970s of Hitchcock himself discussing his methods. Even better, we see a few behind the scenes moments of the director shooting “Blackmail.” Contemporary directors also appear to discuss Hitchcock’s style and technique as film clips illustrate what the participants are saying. It is an interesting addition to the disc.

This feature length documentary on Cary Grant is surprisingly wonderful and fairly comprehensive. It does not ignore some of the more controversial aspects of Grant’s life (although it has a tendency to play them down) and it discusses his career in more detail than some of the other documentaries available about the actor. It is consistently interesting and a welcome addition to this release. Many are likely to prefer this feature over all of the others on the disc.

This is an interesting theatrical trailer featuring Alfred Hitchcock himself.

Vintage trailers are usually interesting and this one is no exception. However, the trailer featuring Hitchcock is superior.

This is a black and white television spot for the film. It is quite like the theatrical trailer for the film.

A collection of stills and behind the scenes photos from the film. It also includes additional photos from the shooting of Destination Hitchcock: The Making of North by Northwest. 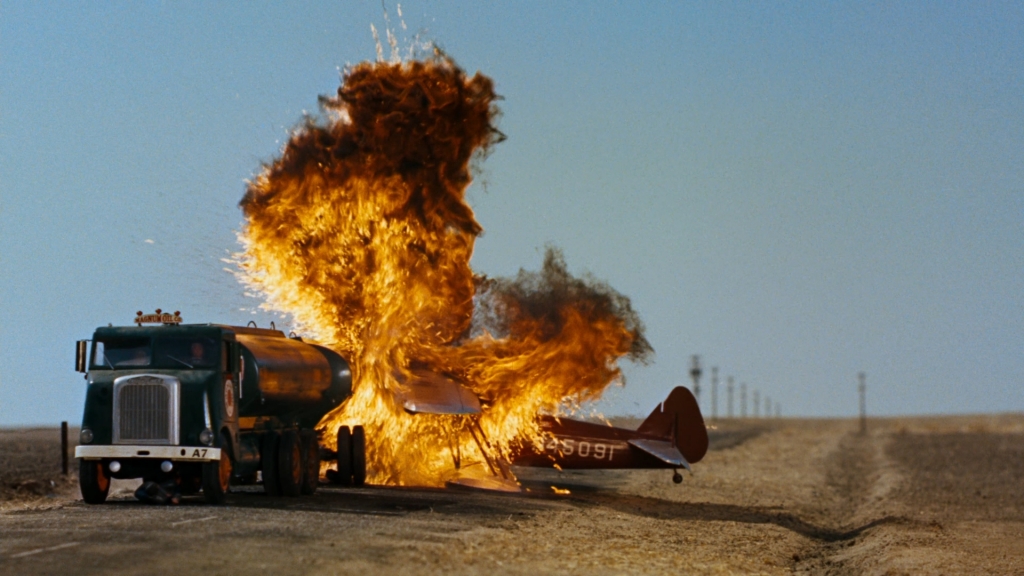 Warner Brothers has provided Hitchcock fans with an amazing Blu-ray release that includes a terrific transfer and a vast collection of worthwhile supplements. The 8K restoration and transfer is truly beautiful. This disk is essential.