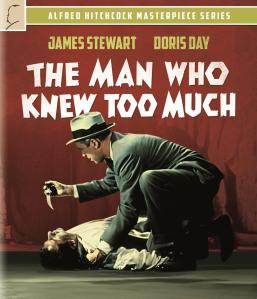 Notes: This title has had a number of DVD releases and is also available on Blu-ray as part of a boxed set entitled The Masterpiece Collection. The transfer used for the boxed set is the same one that is included here and the disc includes the same special features. The artwork on the actual disc is the only thing different about this release.

“Let’s say that the first version is the work of a talented amateur and the second was made by a professional.” –Alfred Hitchcock

The main focus of argument concerning this film seems to be whether or not his 1934 British original is superior to this 1956 American remake. Critics and scholars seem to be split on this issue. Donald Spoto seems to prefer the 1956 remake:

“Even a single viewing of each supports the director’s own estimation. Where Man 1 had an easy wit and a kind of grimy nonchalance, Man 2 is everywhere a richer film – not only in technical execution, but also in the complexity of its characters and themes and, most of all, in the depth and directness of its emotion. The fourth and final collaboration with the gifted screenwriter John Michael Hayes, this is one of Hitchcock’s masterworks, impeccably photographed by Robert Burks, with a brilliant Bernard Herrmann score and flawless performances from principals and the supporting players. It also seems to this writer Hitchcock’s warmest film – lacking a major wicked character or situation, and really full of love.” – The Art of Alfred Hitchcock

“Hitchcock is on record as preferring the later version, citing among other reasons the subtle humor, Bernard Herrmann’s orchestration, the placing of the shots and James Stewart’s performance. It is difficult to imagine just how Hitchcock could prefer the remake. While the 1934 version may be occasionally stilted, the 1956 version is flaccid and overlong. The technical improvements do not compensate for the overall dreariness of the later film, which at times seems like a clumsy parody of Hitchcock; the fight in the taxidermist’s shop, for example, is designed as a set piece divertissement but it comes across as contrived, irrelevant and humorless…

…While the majority of Hitchcock films allow the audience to suspend their disbelief, blissfully unconcerned with the actual mechanics of the MacGuffin, the 1956 The Man Who Knew Too Much contains more jarring notes than even the most credulous audience can accept…” – The Films of Alfred Hitchcock

Critics arguing both sides usually call upon the same evidence to argue their opinions and in the end no one from either side seems to offer a definitive argument. It is impossible to say which film is the better version because of the simple fact that each film has its own set of strengths and weaknesses (and the weaknesses in both films are directly related to their strengths).

A more interesting debate would perhaps be whether or not Angus MacPhail deserved a screen credit for his work on the film. The disagreement over this issue resulted in the end of Hitchcock’s working relationship with Hayes.

This disc is available as part of The Masterpiece Collection boxed set and as an individual disc.

The Masterpiece Collection is given a tasteful book-style presentation with a page for each film that includes a folder for each disc. Some might prefer that each disc come in its own standard Blu-ray case. These folder style compartments do not always protect the discs and very often cause scratches. 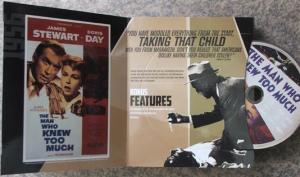 The individual release presents the disc in a standard Blu-ray case with film related artwork.

The menu on the disc contains footage from the film accompanied by music in the same style as other Universal Blu-rays. 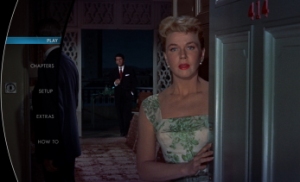 Overall, Universal provides a very nice presentation that should satisfy almost everyone.

The 1080P transfer is a pretty disappointing. While it features a much more detailed picture than any of the previous home video releases, color pulsing seems to be an issue here. Colors also appear pretty dull throughout the film, but a comparison with the previous DVD of the film shows that this transfer is an improvement over that release. The image on the previous DVD version of TMWKTM looked a bit jaundiced (featuring an unattractive yellow hue). There are quite a few blemishes on the print (such as scratches and grime), but these issues never really became distracting.

The 2.0 DTS-HD audio track is clean and seems to accurately represent the film’s source materials. The film’s music sounds much better than one would expect a 2.0 Mono mix to sound and dialogue is always clear. This might not compete with more modern 5.1 tracks, but this mix certainly represents the audio as it was intended to be heard.

Laurent Bouzereau’s documentary is both informative and entertaining. This one might not be as comprehensive as some of the others, but it is much more than the usual fluff included on so many discs. As a matter of fact, this piece is quite in depth and even discusses the original British film. Fans should be thrilled to see it ported over for this Blu-ray release.

A gallery of Posters (from both the original version and this 1956 remake), lobby cards, and “behind the scenes” photographs from the film plays in a slide show presentation.

This theatrical trailer is actually quite interesting. It is different from many other trailers of the period and features James Stewart narrating.

This re-release trailer features narration from James Stewart about the re-release of Vertigo, The Man Who Knew Too Much, The Trouble with Harry, Rope, and Rear Window. It is surprisingly interesting

This disc’s transfer is a bit of a disappointment, but it is still quite a step up from the DVD transfers.