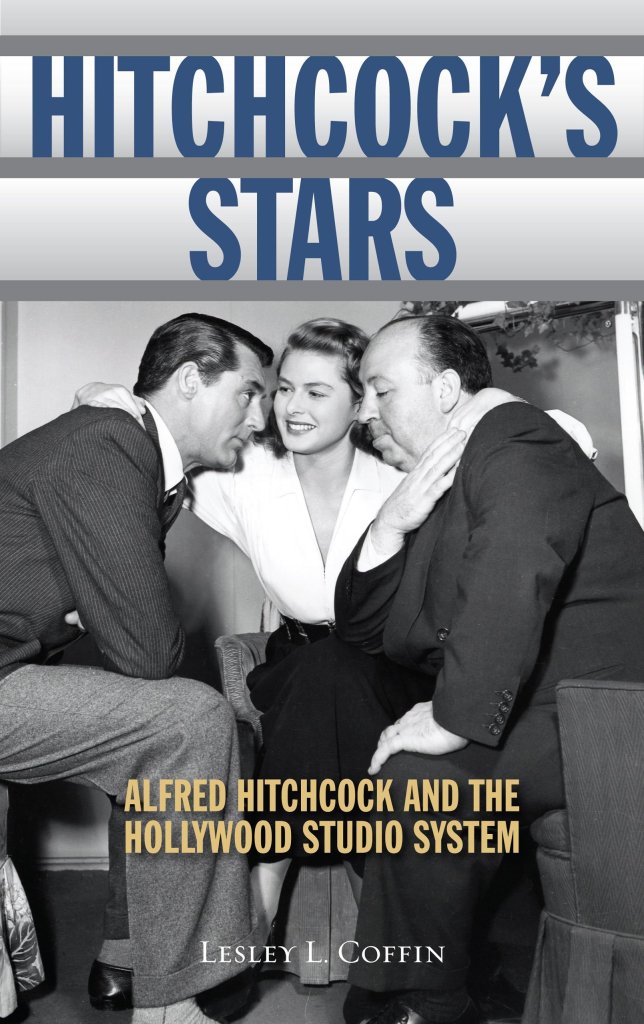 “Rarely when authors talk about Hitchcock’s filmmaking team do they address the contributions of his actors. There is little or no serious attention paid to them or any in-depth study of their contributions to his films… While actors are often the focus of the gossip surrounding Hitchcock’s life, the contributions and performances given are rarely approached with any seriousness…

…The memorable statement on livestock is an ironic one considering just how many iconic performances by some of Hollywood’s greatest stars he directed.” –Lesley L.Coffin (Introduction to “Hitchcock’s Stars”)

Hitchcock’s Stars: Alfred Hitchcock and the Hollywood Studio System tackles a topic that is rarely discussed in any amount of detail. Coffin’s text attempts to shed new light on Hitchcock’s method of using actors (or “stars”) in interesting ways throughout his career in Hollywood. Each chapter covers a different film. The early British period is ignored entirely, instead focusing only on the director’s career in the Hollywood studio system (1940-1976). Each of the director’s films from this period is discussed, with the notable exceptions being Topaz and Frenzy.

Coffin claims that she excludes these films because they weren’t made in American studios, and were shot outside of America (using foreign actors). This leads us to one of the book’s major problems. Her claim that Torn Curtain was Hitchcock’s final film for Universal is simply incorrect. Topaz would have never been made if Universal had not urged Hitchcock to make the film (instead of the un-produced Kaleidoscope/Frenzy project). It was very much a “Hollywood” production. While there was indeed a great deal of location work; some of this location work was in America. A good deal of work was also done in the studio. Frenzy was also produced for Universal (though it was shot in London with a British cast and crew). There are many other factual errors in the book that mar the text. This issue usually stems from her chosen sources. However, at times Coffin uses conjecture presented as fact. This is rather unfortunate, because her writing is fluid and enjoyable.

Many of the interesting discoveries found within the text might very well be true, but they come from “gossip columns” and similar sources from the period. These columns are interesting, but often misleading. Studios often fed false information to columnists (such as Hedda Hopper and Louella Parsons). This gave the studio free publicity and allowed them to keep the actual details from the public. It was also common for these columnists to invent information when sources couldn’t give them anything to write about. This means that some of these interesting tidbits of information might or might not be true. Coffin never questions the validity of her sources (or attempts to back them up with a second source). This is a small complaint, but the unquestioning reader may be led astray by some of this information.

Coffin’s knowledge of Hitchcock also seems to stem mostly from texts by Donald Spoto. This also tends to lead her thesis astray because she never questions the validity of these sources (despite the fact that some of her sources directly contradict Spoto). There are times that her own preoccupations overwhelm a wealth of other information that is never addressed. This means that the reader never has an objective view of the subject being discussed. (To be fair, this approach is almost certainly intentional.)

There is a lot to like about Coffin’s text, and the book was a noble undertaking. It is a very enjoyable read, and it is certainly nice to see that this particular topic is finally receiving a book-length treatment. It simply falls short of being absolutely “essential.”