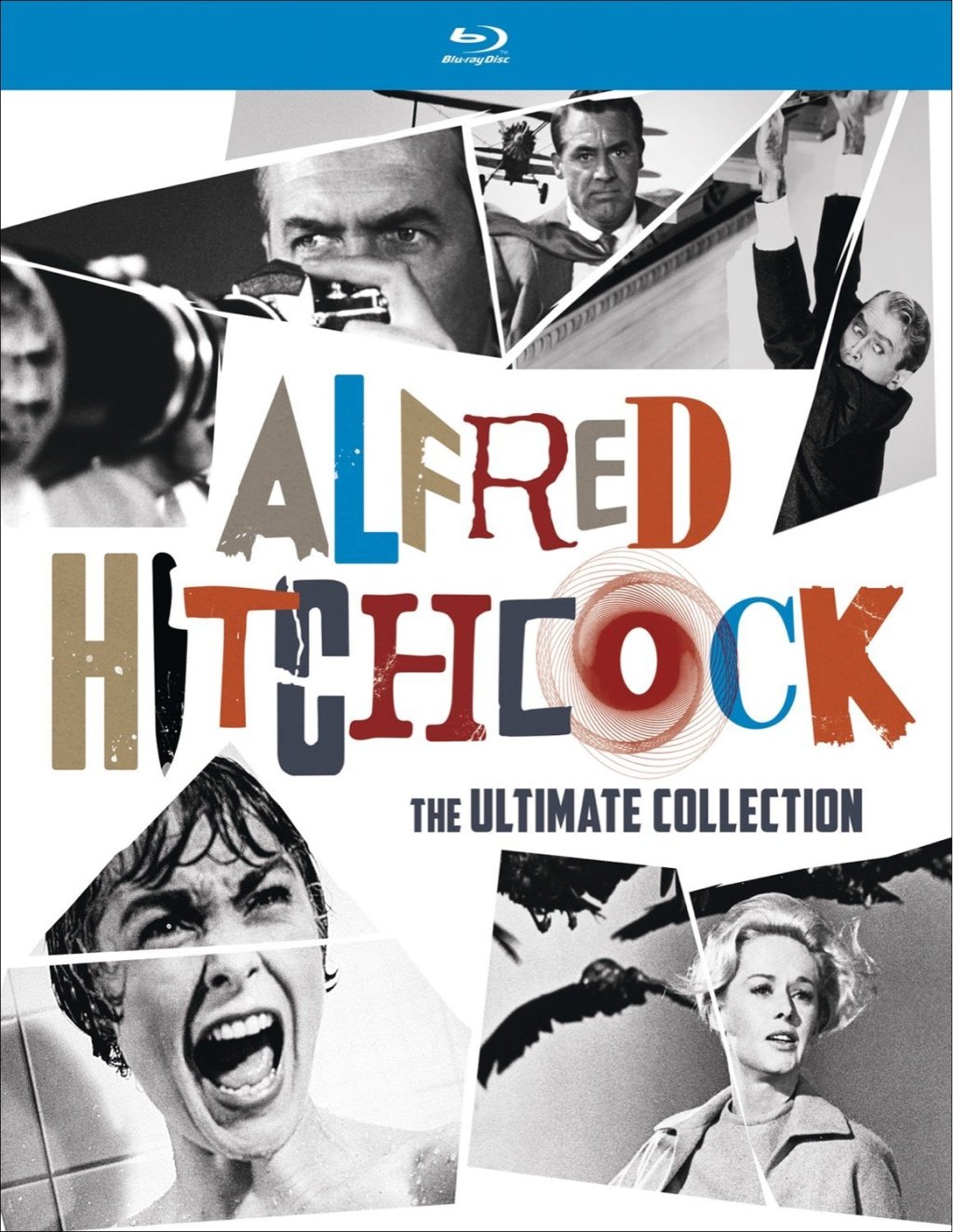 Notes: These films are also available individually with standard Blu-ray packaging and as a part of The Masterpiece Collection.

Universal owns the rights to more Alfred Hitchcock titles than any other studio, and they certainly milk these properties for every penny that they are able to squeeze out of his admirers. However, one really shouldn’t complain since this gives fans an opportunity to own these films with plenty of choice as to how the discs are packaged. Each of the films available in this collection have been available on Blu-ray for quite some time (both as individually packaged titles and as a part of The Masterpiece Collection), and these image and sound transfers are the same ones utilized for those earlier releases. What’s more, these discs include the same supplemental material. Interested parties can read more detailed information about each of the discs included in this set by clicking on the individual links below:

Shadow of a Doubt

The Trouble with Harry

The Man Who Knew Too Much

What really sets this release apart from the previous releases is that it includes two new standard definition DVDs that focus on his television work:

The Best of ‘Alfred Hitchcock Presents’

The series premiere of Alfred Hitchcock Presents is one of the show’s best episodes. It first aired on October 02, 1955 and starred Vera Miles and Ralph Meeker. Those who admire The Andy Griffith Show will also notice Frances Bavier in a supporting role. The story by Samuel Blas follows Carl and Elsa Spann, a newlywed couple just starting their life. Elsa has recently suffered a nervous breakdown but seems to be on her way to recovery. Unfortunately, Carl returns home from work one evening to find that his wife has been attacked. When the police prove to be unhelpful, Carl decides to get justice on his own.

Mr. Blanchard’s Secret pales in comparison. The episode first aired on December 23, 1956 and starred Mary Scott, Robert Horton, Dayton Lummis, and Meg Mundy. The story by Emily Neff revisits some of the themes better explored in Alfred Hitchcock’s Rear Window. Babs Fenton, a housewife with an overactive imagination who fancies herself a writer, believes that Mr. Blanchard has murdered his wife. However, her suspicions are called into serious question when Mrs. Blanchard shows up at their door looking to be very much alive. Babs alters her theory as to the reason behind Mr. Blanchard’s suspicious behavior only to be proven wrong once again.

Lamb to the Slaughter (Season 3, Episode 28)

Lamb to the Slaughter is rightly mentioned amongst the series best episodes. It aired on April 13, 1958 and stars Barbara Bel Geddes (who portrayed Midge in Vertigo that same year). The story by Roald Dahl follows a devoted housewife named Mary Maloney who decides to kill her cheating husband with a frozen leg of lamb rather than let him leave her. What follows is classic Hitchcock.

Poison—which was based upon another tale by Dahl—first aired on October 05, 1958 and stars Hitchcock alumnus Wendell Corey and James Donald. Harry Pope (Donald) wakes up with a poisonous snake in his bed. Worse, it finds a comfortable place to rest right on his chest. The entire episode is devoted to solving this tense predicament.

Arthur first aired on September 27, 1959 and stars Laurence Harvey in the title role. Unusually for an Alfred Hitchcock Presents episode, the story begins with Arthur standing amongst a large number of chickens as he addresses the audience directly. After this opening monologue, we flash back in time as he tells the viewer how he killed his gold-digging girlfriend and was able to get away with it. The story itself is rather amusing, but the framing device at the beginning and end doesn’t work very well (possibly because there is already an introduction and epilogue performed by Hitchcock).

Mrs. Bixby and the Colonel’s Coat is more benign than many episodes, but it has a very similar sense of irony. It originally aired on September 27, 1960 and stars Audrey Meadows, Les Tremayne, and Stephen Chase. The story by Roald Dahl follows Mrs. Bixby as she visits her secret lover “the Colonel,” who ends their affair but offers her a mink coat as a parting gift. She isn’t sure how to explain the coat to her husband, so she pawns the item without putting a description on the ticket. She then tells her husband that she has found the ticket and instructs him to turn it in for the pawned item. Obviously, things aren’t going to work out in quite the way that she expects.

Bang! You’re Dead! originally aired on October 17, 1961 and is the final episode that Alfred Hitchcock directed for the original half-hour series. It was based on a story by Margery Vosper and stars Billy Mumy as a young Jackie Chester—a spoiled six-year-old who mistakes a loaded gun for a gift from his uncle. The child then proceeds to pretend he is an outlaw and points it at the random people he meets throughout the day. It is only a matter of time before he actually pulls the trigger. Meanwhile, his family has discovered the mistake and tries frantically to locate him. Hitchcock’s gift for building suspense is evident throughout the duration.

This disc also includes a single special feature entitled Alfred Hitchcock Presents: A Look Back. Gary Leva’s 15 minute featurette is far from a comprehensive examination of the series, but the retrospective interviews with Norman Lloyd, Hilton A. Green, and Patricia Hitchcock do reveal some general information about how the show was produced and those responsible for its success.

The Best of ‘The Alfred Hitchcock Hour’

I Saw the Whole Thing is the only episode of The Alfred Hitchcock Hour that was actually directed by Alfred Hitchcock. It originally aired on October 11, 1962 and is based on a short story by Henry Cecil. Hitchcock alumnus John Forsythe portrays Michael Barnes in this Rashomon-like courtroom drama with an interesting twist. Barnes has been accused of causing a fatal car accident, but he insists that he is completely innocent and acts as his own attorney at his trial. In court, he proves that the various eyewitnesses called by the prosecution are unreliable.

Three Wives Too Many was directed by Joseph M. Newman and was based on a short story by Kenneth Fearing. It aired on January 03, 1964 and stars Hitchcock alumnus Teresa Wright, Linda Lawson, Jean Hale, and Dan Duryea. The story follows a bigamist who is suspected of murdering his various wives.

Death Scene was directed by Harvey Hart and was based on a story by Helen Nielsen. The episode aired on March 08, 1965 and features Hitchcock alumnus Vera Miles as Nicky Revere, the daughter of a movie director named Gavin Revere (John Carradine). It is best that viewers see this particular episode knowing as little as is possible about the actual story, but it is certainly one of the most memorable of the hour-long episodes.

This disc includes a single featurette entitled Fasten Your Seatbelt: The Thrilling Art of Alfred Hitchcock. This six minute fluff piece includes interviews with Martin Scorsese, Guillermo del Toro, William Friedkin, John Carpenter, Eli Roth, and Joe Carnahan, but none of these filmmakers say anything particularly enlightening. It is almost like an EPK created to sell the idea of Hitchcock’s greatness without ever revealing anything that isn’t immediately obvious.

It’s nice to have both of these new standard definition discs included here, but it is impossible not to wonder why Universal didn’t choose to release discs with each of the seventeen Hitchcock-directed episodes of Alfred Hitchcock Presents and his single episode of The Alfred Hitchcock Hour instead. Such a collection would have been a much more appropriate and satisfying addition to the package. What’s more, this approach would’ve only required one more disc (three instead of the two). Actually, it is ridiculous that Universal hasn’t already released these episodes together in a single collection.

In addition, one cannot help but lament some of the choices made by Universal as to which episodes to include. Some of these episodes are inferior to other Hitchcock-directed episodes from that respective season. For example, season two’s One More Mile to Go is vastly superior to Mr. Blanchard’s Secret. In fact, it is one of the best of the entire series. Of course, this particular issue wouldn’t be a problem if all of the Hitchcock directed episodes had been included.

The packaging is very similar to Universal’s Masterpiece Collection, but the artwork is somewhat different. It is of course a matter of taste as to which is better, but most should agree that the design is just as pleasing as the one utilized for that earlier release. From an aesthetic standpoint, this collection is beyond reproach. Unfortunately, it is the sort of design that seems special on the surface but actually provides the consumer with less value than if each film had been provided with a sturdy individual Blu-ray case.

It is time for studios to do away with these book-style sets that house the discs in folder-like sleeves. This leaves the discs vulnerable to scratching and other types of damage, and disc protection should always be the first priority when designing these collections. What’s more, it doesn’t allow the collector to arrange their collections in the manner that they might wish. (This reviewer prefers chronological arrangement). 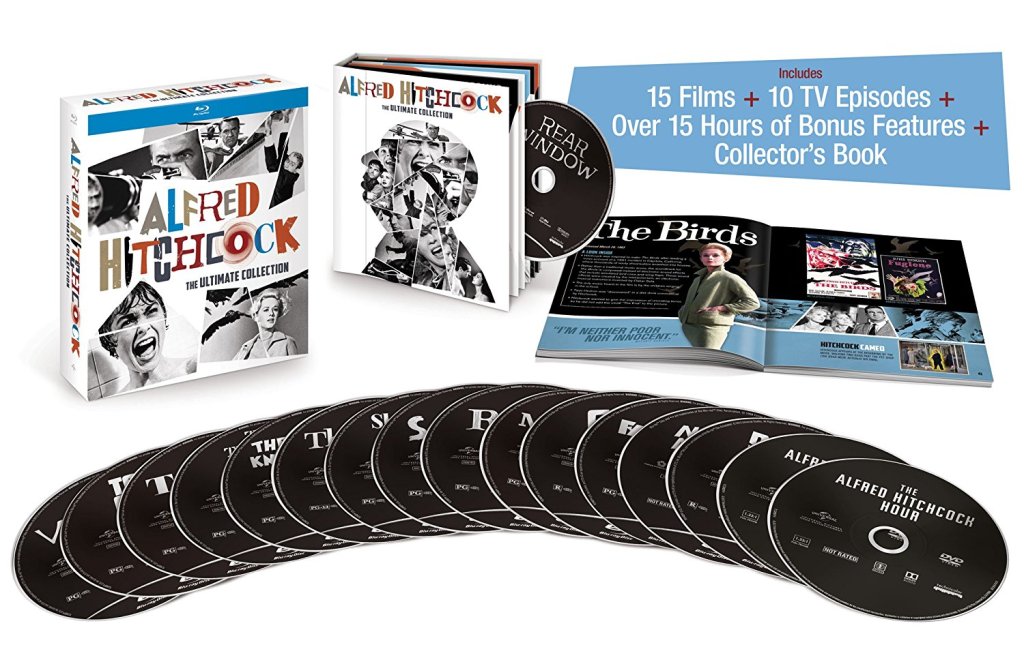 This particular book-style release devotes two pages to each of the films included therein. The first of the two pages features the film’s one sheet while the second includes a quote, a brief description of the film, and a list of bonus features. A promotional still from the film is also utilized. Since this is the same information that one might find on the slip sleeve of any regular release, it only gives one the appearance of additional value when in actuality it is probably much cheaper than including individual cases for each title.

A small softbound book entitled “The Master of Suspense” is also included. There are around 58-60 pages worth of material here (depending on how one chooses to count them), and it does add a bit of value to the package. It includes some extremely general biographical information about Hitchcock and his career, a few paragraphs about his leading men, a page that focuses on “The Hitchcock Blondes,” two pages that focus on Edith Head (including a handful of costume sketches), two pages that showcase Saul Bass (with a series of screenshots from the title sequences for Vertigo and Psycho), a page about Bernard Herrmann, a half page about “The MacGuffin,” and another half page about the director’s cameo appearances. After these subjects, the book focuses on each of the films included in this set. Film trivia, artwork, storyboards, photographs, letters, and memorandum have been included throughout these pages in Universal’s effort to create an attractive keepsake. There isn’t much in the way of information here (and some of it borders on being erroneous), but it does make for a fun reading experience.

The back sleeve of this release screams “The Best of Alfred Hitchcock,” and one must admit that the set does include a number of the master’s best films. However, it is ridiculous to claim that the set represents Hitchcock’s best work because some of his best films aren’t included here while some of his worst films are present. For example, few would rank Topaz above Notorious or Strangers on a Train. This set is simply a complete collection of the films that Universal actually owns (with North by Northwest included as a healthy bonus due to a licensing trade).

It is certainly an impressive collection of films and those that don’t mind the folder-book packaging might wish to grab this set while supplies last—that is if they do not already own these films individually or as part of The Masterpiece Collection. The two new DVDs might not be worth an upgrade (especially since they weren’t given a new 1080P transfer for this release).