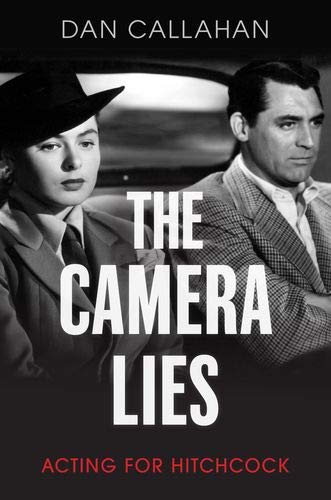 A Conversation with Dan Callahan

“Even when we know everything about a movie down to its shooting schedule and budget and technical tricks, we believe at some level that the magic trick is real. And of course nothing delighted Hitchcock more than explaining his tricks with the camera, his devices to make it lie. He wanted us to know it all and then still fall for it, and fall in love. Watch his films again, fall in love again, and know that we are falling in love with a mirage, with a lie.” –Dan Callahan (The Camera Lies, 2020)

Alfred Hitchcock is said to have once remarked, “Actors are cattle,” a line that has stuck in the public consciousness ever since. For Hitchcock, acting was a matter of contrast and counterpoint, valuing subtlety and understatement over flashiness. He felt that the camera was duplicitous and directed actors to look and act conversely. In The Camera Lies, author Dan Callahan spotlights the many nuances of Hitchcock’s direction throughout his career. The text spans the director’s entire oeuvre—from The Pleasure Garden to Family Plot—as Callahan examines the spectrum of treatment and direction Hitchcock provided his actors. Behind Hitchcock’s outward indifference to his players was a sophisticated acting theorist who often drew out great performances.

Dan Callahan is the author of Barbara Stanwyck: The Miracle Woman, Vanessa: The Life of Vanessa Redgrave, The Art of American Screen Acting, 1912-1960, and The Art of American Screen Acting, 1960 to Today. He has written about film for Sight & Sound, Film Comment, Nylon, The Village Voice, and many other publications. Alfred Hitchcock Master is honored to have had the opportunity to talk with Mr. Callahan about The Camera Lies, and we would like to share this conversation with our readers:

AHM: How did you become interested in Alfred Hitchcock’s work?

DC: When I was eight years old, Channel 9 in Chicago ran a weeklong festival of Hitchcock movies, and I was very taken with them. I kept talking about them, and so my mother bought me a book called The Films of Alfred Hitchcock by Patrick Humphries. This was around the time when Blockbuster Video opened, and when my mother took me there, they had a Hitchcock section. And so I rented tapes and kept renting them. My lifelong interest in cinema began with Hitchcock.

AHM: Do you have a favorite Hitchcock film?

DC: I would have to say Notorious (1946) because that’s the one I really love the most. When I was writing my book, I actually watched Notorious three times in a row in a single day. It’s like I wanted to live in that movie. I think it’s the best because it is the most romantic, the most painful, and it makes me believe in the possibility of two damaged people reaching out to each other and finally healing each other. That’s the large dream, and Hitchcock is very invested in that dream.

AHM: How did you come upon the idea for a book that focuses on the acting in Hitchcock’s films?

DC: James Bell, my editor at Sight & Sound, asked me to contribute an article on acting in Hitchcock films for a BFI booklet, and that got me thinking about it as a book idea. I had always wanted to do a Hitchcock book, but I wasn’t sure I ever would because there have been so many. I felt like this would be a fresh approach.

AHM: Why do you think Hitchcock’s work has endured for so long, and what makes it so ripe for further study?

DC: Because it is so open to interpretation. You cannot define any of these movies or pigeonhole them. They are as good as they are because they aren’t fixed. They shift every time you see them. I think there will always be room for valid re-interpretation as long as it isn’t reductive.

AHM: How was Hitchcock’s approach to screen acting different from that of other directors?

DC: His approach was extremely technical. He knew exactly how he wanted a face to look on screen and the expression he wanted from the actor. He wasn’t interested in discussing motivation, but he could be very helpful. Hitchcock once told Louise Lorimer—who was playing Strutt’s wife in Marnie (1964)—to smile as if she “had a mouth full of broken china.” He just needed to know you were serious about his films. He wasn’t happy with stage actors in the 1930s like Peggy Ashcroft, John Gielgud, and Michael Redgrave because they weren’t taking his work seriously enough. By the time he made Psycho (1960), Janet Leigh and Anthony Perkins were very serious and enthusiastic about their roles, and so he worked with them. He even sat near Leigh during the car scenes and read the voices her character Marion is hearing in her head.

AHM: Which actor (or actors) do you think best suited Hitchcock’s particular style, and why were these talents a better fit for his films than others?

DC: Hitchcock said the best actor for him was one who “could do nothing well,” and this isn’t as easy as it sounds. His ideal in that regard was the stage actor Gerald du Maurier, the father of Daphne, who wrote Rebecca (1940). From my perspective, the best Hitchcock actors are the ones who can hit notes of pure ambiguity with their faces, like Peter Lorre in the first The Man Who Knew Too Much (1934) and Judith Anderson in Rebecca…many different thoughts and emotions and qualities going on at once beneath a kind of mask. Kim Novak in Vertigo (1958) is maybe the ultimate for that kind of acting, which is allied to the mystery of human behavior. Casting was also key. Robert Walker is as brilliant as he is in Strangers on a Train (1951) partly because he had always played vulnerable male ingénues before that, and so his Bruno Antony comes as a real shock.

AHM: I really enjoyed the chapter on The Pleasure Garden. Of all of Alfred Hitchcock’s films, this is the one that I have seen the least (with the obvious exception of The Mountain Eagle). I’ve only seen it twice, and the book made me want to revisit the film. Do you feel like Hitchcock’s approach was already developed when he started directing movies, or would his methods evolve throughout the decades?

DC: I think that Hitchcock was very nervous with actors when he first started out. He sometimes wasn’t too sure how to handle them. For instance, he was very timid with Virginia Valli because she was a star imported from America. By the mid-1930s, he knew what he wanted from actors and gave several interviews where he was extremely articulate on the subject of acting for the camera and what it entailed.

AHM: How did his directorial approach change once he began working with bigger stars in Hollywood?  …or did it change?

DC: He was already working with stars during his British period, like Sylvia Sidney, who was brought over to England for Sabotage (1936). I think everything got easier for him in America because the actors were both freer and more serious. In England, he was working with a lot of overly genteel actors who often didn’t take their own careers too seriously and retired early. Whereas in America he began working with all-in performers like Carole Lombard and Tallulah Bankhead. I think the only problem he had was sometimes not getting the stars he wanted. He wanted Gary Cooper for several projects but never managed to get him.

AHM: Was his approach different on the projects that were produced by Selznick?

DC: He lacked control under Selznick. For instance, I don’t know if he would have cast Joan Fontaine in Rebecca if Selznick hadn’t pushed for her because several of Hitchcock’s colleagues were against her. Selznick was a fetishist about hair and make-up and things like eyebrows, and this went even beyond Hitchcock’s own interest in those surface things (which was considerable).

AHM: As you mention in your book, Hitchcock believed that he made mistakes with Secret Agent and Sabotage. I agree that Secret Agent is a flawed film, but I completely disagree with him about Sabotage. The trouble with Hitchcock is that he had a tendency to adopt opinions that were based on a film’s critical reception upon its release. This has hindered contemporary reappraisal of his underappreciated efforts. It is my personal belief that Sabotage is one of the director’s strongest British efforts. Vertigo was also dismissed upon initial release, and it is now considered one of his best efforts. Which of his underrated efforts would you most like to see given a Vertigo-style reappraisal?

DC: I love Mr. and Mrs. Smith (1941) and make a strong case for it in my book, so that’s the one I would pick for some reappraisal.

AHM: In the book’s eighth chapter, you write that Young and Innocent is “well below par, and this is what makes it the weakest film in this resurgent period in Hitchcock’s career.” I was wondering whether this means that you prefer Jamaica Inn to this film.

DC: I would say that I do because there are a lot of interesting elements in Jamaica Inn, even though it doesn’t work as a whole. The female protagonist (Maureen O’Hara) is very lively and active, and Emlyn Williams’s pansexual character is fascinating.

AHM: I must say that I was thrilled to notice an obvious appreciation for The Wrong Man in the pages discussing that film. It deserves more attention and affection from scholars.

DC: I’ve been promoting my book on Facebook, and when I was discussing this film I said that if I were asked what I thought Hitchcock’s greatest film was, I would be tempted to say The Wrong Man. I do not think there is any stronger movie in his filmography. It’s an achievement on a very high level, concentrated and without flaw.

AHM: Hitchcock’s late career is often considered something of a creative decline, but I have always considered this the result of various changes in his creative life. For one thing, he was under contract to Universal. The studio nixed several projects that he was passionate about and forced him to make spy thrillers. Both Torn Curtain and Topaz were made to satisfy the studio suits. He also lost his cinematographer (Robert Burks) and editor (George Tomasini) to death during this period. Finally, the star system was changing. Film acting was an evolving art, and the new crop of actors didn’t quite suit his particular style.

Am I making excuses for my favorite filmmaker, or do you agree that these changes resulted in a decrease in the quality of his films? Why didn’t the actors from this period suit Hitchcock’s directorial approach to screen acting?

DC: Paul Newman and Julie Andrews were disastrous for him in Torn Curtain, but they happened to be the biggest stars at that particular moment. I do think, as you say, that the decline in his work is in large part because Universal didn’t want him to make the films he wanted to make and wanted these Cold War thrillers instead. But there were actors he wanted to work with, like Julie Christie, who might have done well in his films, though she might have been too edgy. I wish he could have worked with Catherine Deneuve. She would have been an ideal heroine for him as she is beautiful, hyper-controlled, and perverse. But he did have a problem finding men to equal Cary Grant or Jimmy Stewart. There was talk of Al Pacino for Family Plot (1976), but I can’t really imagine that working very well. The heightened stars of that classic Hollywood period were gone, and Hitchcock needed them.

2 thoughts on “Book Interview: The Camera Lies – Acting For Hitchcock”