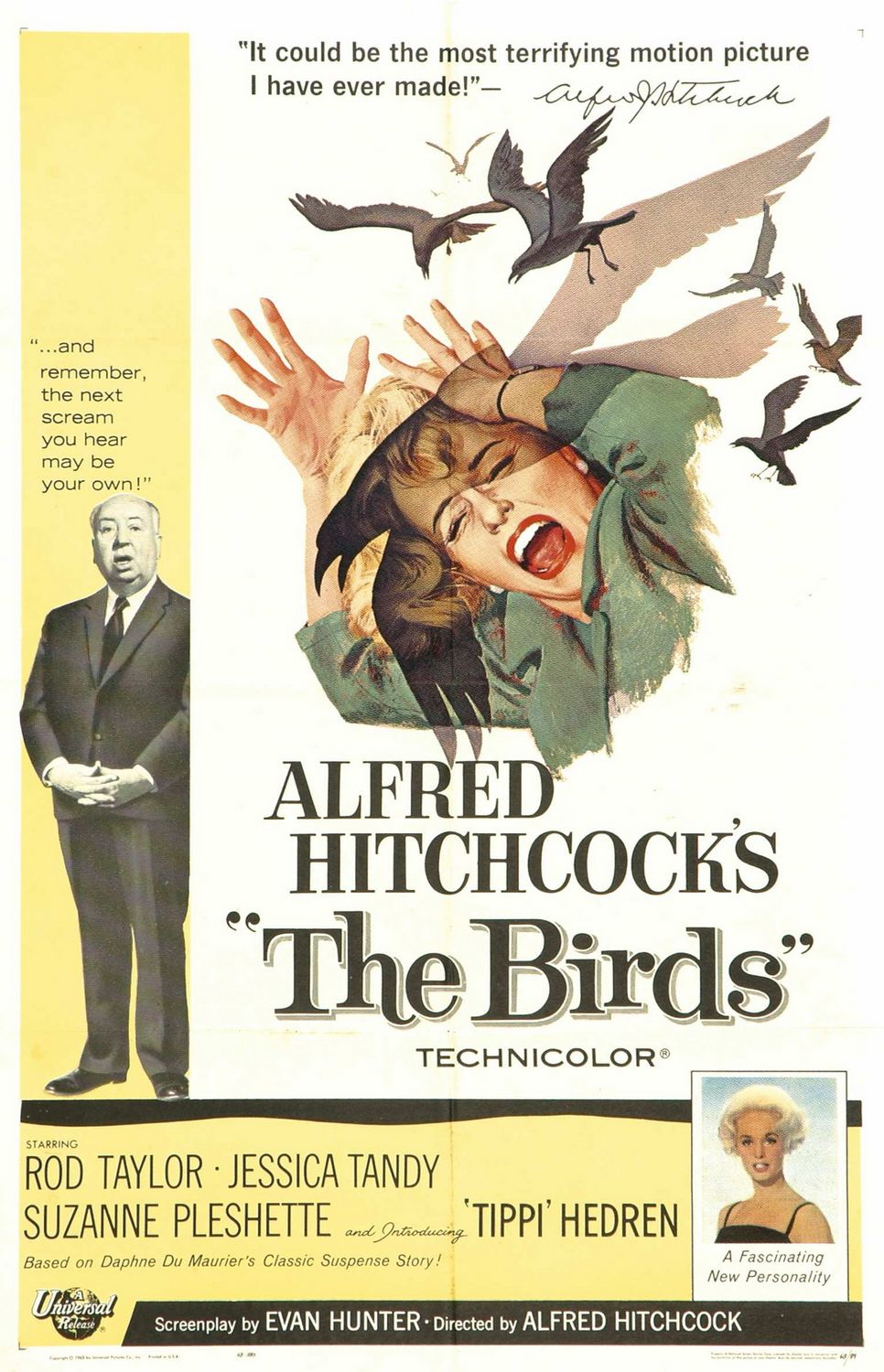 This article is the final entry in a series of four guest articles to appear on this page in celebration of Universal’s release of ‘The Alfred Hitchcock Classics Collection.’ 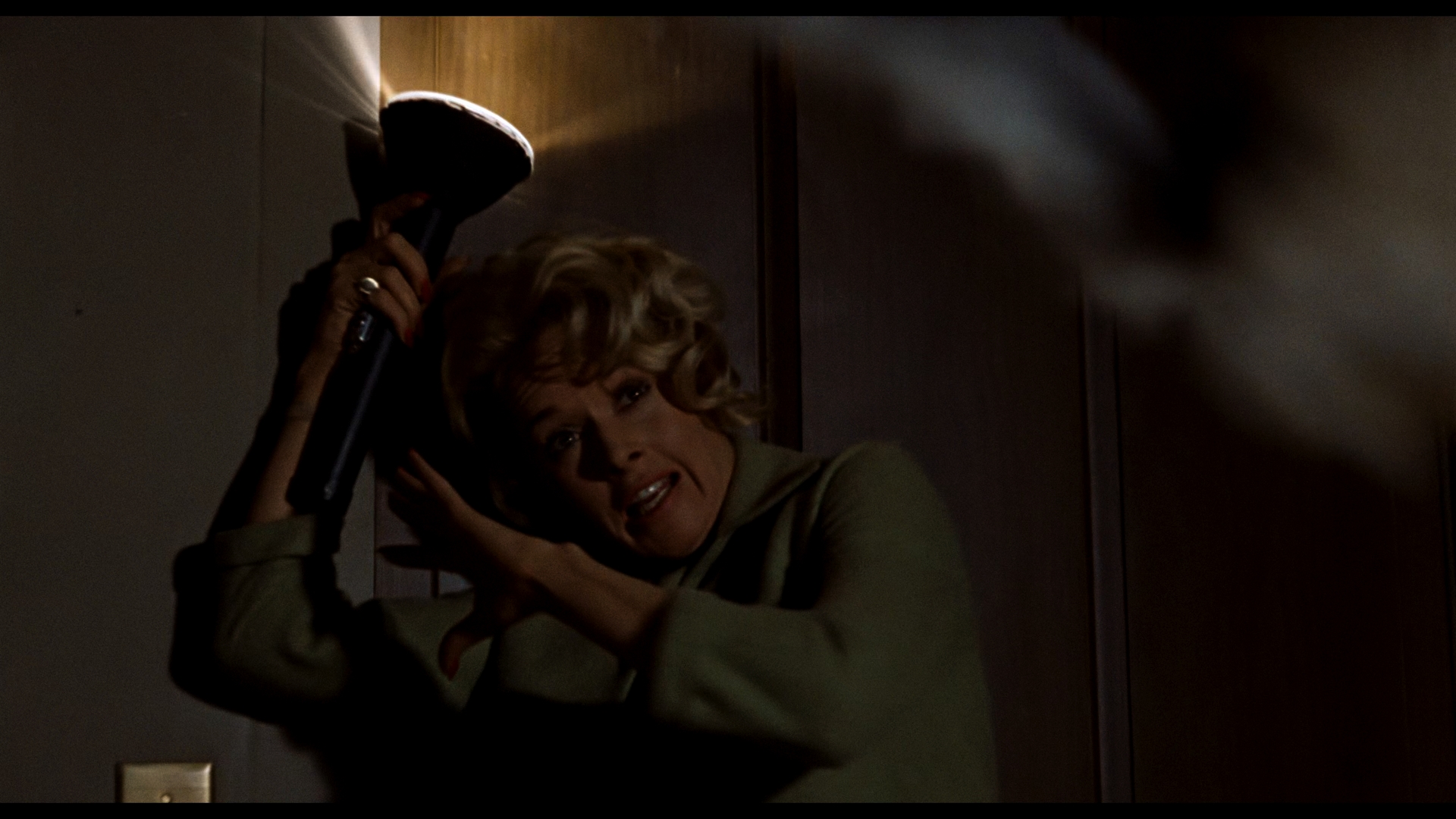 The Birds was made during the pinnacle of Alfred Hitchcock’s career — following the monumental success of Psycho in 1960. Hitchcock felt that he was entering his ‘golden age’ and was brimming with ideas. This was his creative peak, and this would surely be his crowning achievement. It would take almost two years—from 1961 to 1963—to bring The Birds to the screen, and it was set against the tumultuous background of the Cuban Missile Crisis and JFK’s presidency.

Hitchcock knew that suspense grew from the fear of the unknown and allowing the audience to use their imagination. This use of suggestion—and not visually showing the menace during the attack on the Brenner House—was to become an important influence for many directors in their films. As Roger Corman said, “Hitchcock’s importance to me, personally, is exemplified by the way he reveals his monsters. Whether they be birds or a man dressed as his mother, Hitchcock never lets the audience see the entirety of the monster until the end of the film.” This would be most evident in latter monster movies—such as Jaws (1975) and Predator (1987)—where a full sighting of the actual beast is not seen until near the end of the picture. To reveal the monster too early would be cheating the audience and depriving them the pleasure of seeing it in all its glory later.

A clever marketing campaign ignited public interest in the film with theatrical trailers and punchy radio commercials featuring Alfred Hitchcock. “If you have ever eaten a turkey drumstick, caged a canary, or gone duck hunting, The Birds will give you something to think about,” the director said in one radio spot. “If you are the type of person who goes to a bull fight and roots for the bull, you’ll love The Birds.” The film swiftly became known as a precursor to the modern horror movies. It’s also of interest to note that during its production in the summer of 1962, The New Yorker published excerpts from Rachel Carson’s “Silent Spring” which is credited with launching the environmental movement.

As the Coronavirus pandemic unfolds across the world and we watch various Governments respond to it, we are reminded of Alfred Hitchcock’s remarks to Francois Truffaut during the making of The Birds in 1962. Hitchcock said that his film was about complacency, and that ordinary men and women go about their lives regardless that catastrophe can be imminent. The film was conceived during the Cuban Missile Crisis, the Bel Air Fire, the Missouri Floods, and the overshadowing threat of nuclear war. Hitchcock said he wanted to stir people out of their complacency.

Today, in our volatile and pandemic ridden planet, it’s all too easy to identify with The Birds since violence can erupt in our lives at any moment. We are threatened by viruses, hurricanes, earthquakes, storms, and floods—yet the vast majority of us are oblivious to these dangers. Most of us take nature for granted until we are faced with loss or the eruption of chaos, and this is represented by the birds. Hitchcock’s characters represent those who face up to disaster and reveal their inner strength, and we see how fragile and precious human relationships are.

No more than today does Hitchcock’s remarks about the meaning of The Birds seem more relevant, as countries struggling to control the Coronavirus introduce shutdowns and a variety of social distancing measures. Some countries like South Korea acted quickly, while others such as Spain, the US, and the UK were slower to enforce lockdowns. These countries are now paying the price as the number of positive cases are escalating in Europe and the USA while they contend with the financial effects of a crumbling economy.

Like the mysterious birds that attack Bodega Bay, the Coronavirus seems to have come out of nowhere—reportedly from a wet market in China—and has quickly spread across the globe (facilitated by our predilection for international travel). Suddenly all our lives are affected. We are now caged in our houses and apartments while under government orders to stay at home, businesses are shut down, and capital cities are in lockdown. Outside, there is evidence that nature is reclaiming what we stole from it. Sika Deer have been spotted in Japan’s cities, raccoons appear on an empty beach in Panama, and coyotes are being seen on the streets of San Francisco. These reports suggest that nature is rebalancing itself after decades of being crowded out by an ever increasing human population. Others suggest the pandemic is retribution—as the intermediate host of Coronavirus is the pangolin (the most trafficked mammal in the world).

As in the pivotal scene in The Birds—when the residents of Bodega Bay take shelter inside the Tides restaurant—countries blame each other for starting the virus. America blames China. China blames America. Social distancing bans are ignored, subways and buses are crammed, and the complacent attitude of “nothing bad is really going to happen to me” is all too prevalent in our society. Why does Melanie Daniels go up to the attic for the climatic bird attack? Despite all the warnings and everything she has been through, she still enters the avian filled room. Maybe—like us—she doesn’t think anything bad will happen to her. Complacency must be beaten out of her by the birds, and she narrowly escapes with her life… Just like the Coronavirus has taken its toll on those who think of it as “just a virus” — one notch above the common cold.

The Birds inexplicably attack in waves followed by an eerie retreat. There are predictions that the Coronavirus will suddenly disappear. The world will wait and watch. “It’s the end of the world!” spurts the drunk at the Tides restaurant. The pandemic won’t kill off the human race, but like the fury of the birds, it will hopefully remind us to be more respectful in our attitudes to nature.

Tony Lee Moral is the author of “Hitchcock and the Making of Marnie,” “The Making of Hitchcock’s The Birds,” and “Alfred Hitchcock’s Movie Making Masterclass.” All three of these titles are available on Amazon.com.