Notes: Criterion has also released a DVD edition of this title.

“My aim, I have said, was to reintroduce the dramatic into quotidian situations, the marvelous in a little news item, even in the smallest news item, considered by most people throwaway material.” —Vittorio De Sica

The story of Bicycle Thieves probably wouldn’t be printed in any major newspaper if it had happened in real life. Editors would consider it “throwaway material.” After all, newspapers tend to give facts void of any real emotion. Journalists rarely get into the really interesting aspects of their stories. The humanity is hidden somewhere between the words, but we fail to grasp it because it isn’t made concrete. These human elements must be inferred by the sensitive reader. This is where cinema can be superior. Humanity can be found in every single action that a character does (or doesn’t do) on the screen. Even a look or expression can contain limitless drama. The true strength of neo-realist masterpieces like Vittorio De Sica’s Bicycle Thieves is in the simplicity of the story. Audiences aren’t wasting their attention on complex plot detail, and this frees them to absorb the humanity inherent in every character.

Bicycle Thieves is a textbook example of neo-realism. It is the simplest of stories but contains complex human emotions. A synopsis of the story wouldn’t hint at the raw emotion and brutal honesty that overwhelms nearly every frame. The film was perhaps too honest for the Italian public, because it wasn’t particularly successful in its home country. However, the rest of the world certainly took notice. American critics were unanimous in their praise of Bicycle Thieves, and the film won the Academy Award in 1949 for the Best Foreign Language Film. This is certainly ample evidence to suggest that Hollywood was paying attention.

What is especially surprising is the effect that it had on Alfred Hitchcock. The director had a nasty habit of making slightly disparaging remarks about neo-realism to the press, but this was simply a ruse that he used in order to explain the difference between the kind of films that he made and the new trend of realism that invaded many Hollywood productions after the success of Italy’s neo-realistic efforts. (This trend was extended after the later success of the French New Wave).

Charles Thomas Samuels once interviewed Hitchcock and—in an attempt to make a point about how other cinematic methods could also be quite effective—Thomas used Bicycle Thieves (a.k.a. The Bicycle Thief) as an example. Hitchcock evaded the argument.

“You’ve got to remember that The Bicycle Thief wasn’t a success with the Italian audience… We have a home in Northern California, and in the period of The Bicycle Thief, we happened to have an Italian couple working for us who spoke not one word of English. One day my wife and I took the mother and her daughter into San Francisco, where my wife and the girl had to do some shopping. Since I didn’t know what to do with Mrs. Chiesa, I decided to take her to see The Bicycle Thief. It was an Italian movie, I thought it might interest her. There was a knot of about twenty people in the theater—it was a road show, I remember, at the Geary—and we watched the film. Do you know, she only gave one exclamation the whole time: when the father cuffed the little boy. So when we got outside, I asked her how she’d liked it. She said, ‘Okay. But why didn’t he borrow a bicycle?’ Of course, she demolished the whole thing. So I said, ‘Mrs. Chiesa, what films do you like’ ‘Ah,’ she said, ‘I like a Betty Grable musical.’” –Alfred Hitchcock (Encountering Directors, an interview with Charles Thomas Samuels, 1972)

This anecdote is misleading. It suggests that Hitchcock wasn’t fond of the film, when this was far from the case. One will notice that he substitutes his housekeeper’s opinion for his own. This is because his opinion would have allowed Samuels to make his point because Hitchcock was actually quite impressed by the film. Patrick McGilligan commented on this in his biography of the director.

“In interviews, Hitchcock sometimes disparaged what he (and some critics) called ‘kitchen sink’ neorealism, telling the press that he and his Italian housekeeper watched Vittorio De Sica’s The Bicycle Thief in San Francisco one day, and that his housekeeper was half bored by the masterpiece. He didn’t always describe his own reaction, but he was impressed by the film, and once told the New York Times that The Bicycle Thief was a perfect double chase—physical and psychological. Hitchcock’s love for Italy was genuine; and he kept up with the postwar cinema there…” —Patrick McGilligan (Alfred Hitchcock: A Life in Darkness and Light, 2003)

In fact, it was Hitchcock’s admiration for Italian neo-realism (particularly Bicycle Thieves) that inspired him to make The Wrong Man—a down to earth film about real people whose lives derail because of a false accusation. He also had planned to make a few other films inspired by Italian neo-realism (and perhaps the French New Wave) in the 1960s. Unfortunately, but these projects never made it into production.

It isn’t any wonder that Bicycle Thieves was a source of inspiration for Alfred Hitchcock. It has been a source of inspiration for countless directors since the film’s 1948 Italian release. It is one of the few undisputed masterpieces of world cinema. De Sica’s masterpiece stands as one of the best films ever produced. The socio-political issues surrounding the story might be dated, but the basic truths in Bicycle Thieves will never go out of date. Critics still rave about the film, scholars still study it, and audiences are still moved by Antonio’s struggle to provide for his family and Bruno’s coming of age as he discovers hard truths about life.

The Blu-ray disc is housed in the clear case that has become the standard for The Criterion Collection. The film related artwork isn’t quite as fabulous as one might expect from Criterion, but it is rather attractive.

Fans of the film will be especially pleased to find an illustrated book featuring an essay by Godfrey Cheshire and reminiscences by Vittorio De Sica and his collaborators. This booklet is actually special enough to set this release apart from most Blu-ray titles.

The disc’s menus are also appropriate, attractive, elegant, and quite easy to navigate. 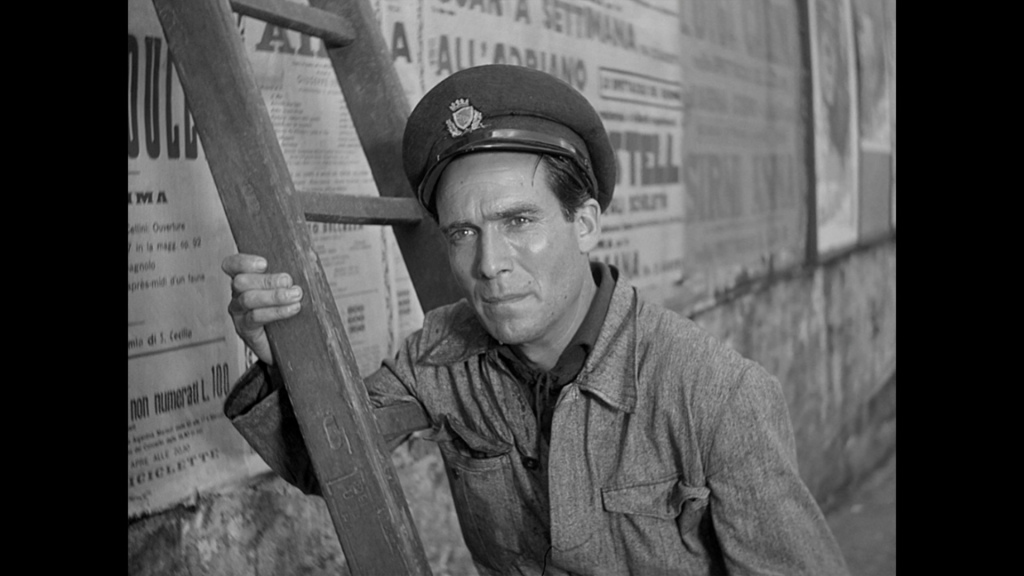 Criterion’s is a 4K digital restoration is presented at a 1.37:1 aspect ratio (which is higher and wider than most releases), which represents an uncropped version of De Sica’s masterpiece. The transfer was also presented at a higher bitrate (34.96 Mbps) than many Blu-ray releases. The image is absolutely stunning with a filmic texture that should please purists. Like so many Criterion transfers, this release reminds us just how gorgeous a black and white image can look on Blu-ray. Details are crisp and clear with an attractive and rich contrast that beautifully displays every shade of grey in between. 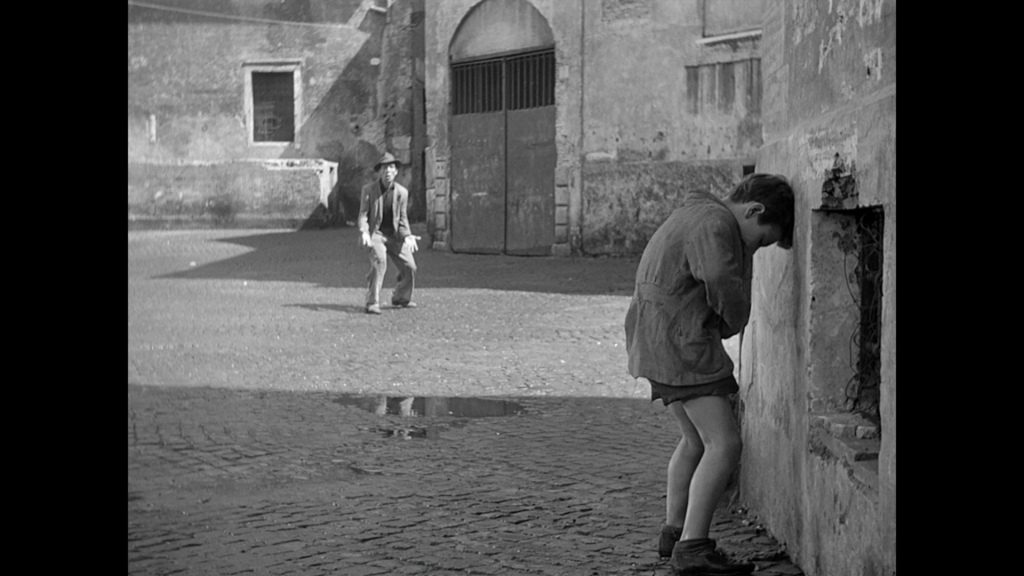 The Italian Mono LPCM audio sounds as good as anyone has any right to expect and doesn’t have as many of the distracting flaws that are usually evident in films of this age. Those who aren’t familiar with Italian neorealist cinema might find fault with some of the film’s quirky dubbing techniques, but frankly this reviewer doesn’t remember any noteworthy dubbing issues. The soundtrack was well done by the filmmakers involved, and was lovingly restored by our friends at Criterion. There doesn’t seem to be any valid reason to nitpick.

An English Dolby Digital audio track is also included, but has not received the same loving restoration from Criterion. However, the track holds up pretty well (though it showcases a few flaws that the Italian track doesn’t).

Utilizing contemporary interviews with Suso Cecchi D’Amico (screenwriter – Bicycle Thieves, Miracle in Milan), Enzo Staiola (actor – Bruno in Bicycle Thieves), and Callisto Cosulich (film scholar), this documentary is both informative and entertaining. These participants discuss De Sica and his work on the film. Staiola’s stories are particularly engaging when he discusses how he was cast in the film.

This 2003 documentary about screenwriter and longtime Vittorio De Sica collaborator, Cesare Zavattini, was directed by Carlo Lizzani. Many sources are interviewed for this informative look at Zavattini’s cinematic achievements (Shoeshine, Bicycle Thieves, Miracle in Milan, Umberto D, and others). It will add exponentially to the viewer’s appreciation of Bicycle Thieves, as well as their understanding on neorealism.

This documentary featuring scholar, Mark Shiel, discuss the origins and qualities of Italian Neorealism and the seven films that Shiel believes are central to the movement. (Rossellini, De Sica and Visconti are all represented here.) His detailed explanation is usually pointed back to Bicycle Thieves without doing any disservice to the other films in question. This is an interesting and informative look at Italian cinema.

Each of these programs are excellent and add a wealth of value to this excellent Blu-ray release.

Bicycle Thieves is without a doubt one of the best films ever produced, and its influence can still be felt today. De Sica’s masterpiece is an absolutely essential film that belongs in everyone’s collection, and Criterion’s Blu-ray is the best way to experience the film outside of a theater.