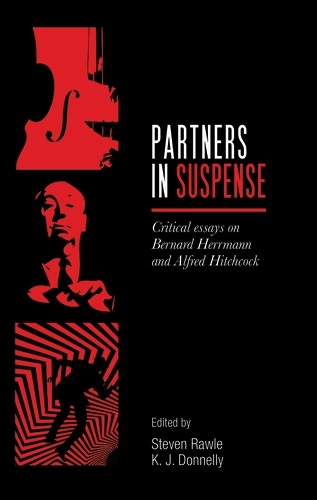 “This book brings together new work and new perspectives on the relationship between Hitchcock and Herrmann. Featuring chapters by leading scholars of Hitchcock’s work, the volume examines the working relationship between the two and the contribution that Herrmann’s work brings to Hitchcock’s idiom, as well as expanding our understanding of how music fits into that body of work. The goal of these analyses is to explore approaches to sound, music, collaborative authorship, and the distinctive contribution that Herrmann brought to Hitchcock’s films. Consequently, the book examines these key works, with particular focus on what Elisabeth Weis called ‘the extra-subjective films’—Vertigo (1958), Psycho (1960), The Birds (1963)—and explores Herrmann’s palpable role in shaping the sonic and musical landscape of Hitchcock’s work, which, the volume argues, has a considerable transformative effect on how we understand Hitchcock’s authorship.

The collection examines the significance, meanings, histories, and enduring legacies of one of film history’s most important partnerships. By engaging with the collaborative work of Hitchcock and Herrmann, the chapters [or essays] in the collection examine the ways in which film directors and composers collaborate, and how this collaboration is experienced in the films themselves. In addition, the collection addresses the continued hierarchization of vision over sound in the conceptualization of cinema and readdresses this balance though the exploration of the work of these two significant figures and their work together during the 1950sand 1960s” –K.J. Donnelly and Steven Rawle (Introduction, Partners in Suspense, January 18, 2017)

As this excerpt from the book’s introduction suggests, “Partners in Suspense” is a collection of fourteen scholarly articles about the creative marriage of Bernard Herrmann and Alfred Hitchcock. Although their working relationship would eventually end in divorce, their collaboration lasted over a decade and gave audiences eight films (some of which are considered to be amongst the best ever made). This is a subject that has too often been overlooked, and a book on the subject is long overdue.

The essays included cover a range of subjects with varying degrees of success. A list of the titles should help one determine the subjects discussed in its pages:

Hitchcock, Music and the Mathematics of Editing – by: Charles Barr

The Anatomy of Aural Suspense in Rope and Vertigo – by: Kevin Clifton

The Therapeutic Power of Music in Hitchcock’s Films – by: Sidney Gottlieb

A Lacanian Take on Herrmann/Hitchcock – by: Royal S. Brown

Portentous Arrangements: Bernard Herrmann and The Man Who Knew Too Much – by: Murray Pomerance

On the Road with Hitchcock and Herrmann: Sound, Music, and the Car Journey in Vertigo (1958) and Psycho (1960) – by: Pasquale Iannone

A Dance to the Music of Herrmann: A Figurative Dance Suite – by: David Cooper

The Sound of The Birds – by: Richard Allen

The Murder of Gromek: Theme and Variations – by: Tomas Williams

Mending the Torn Curtain: A Rejected Score’s Place in a Discography – by: Gergely Hubai

How Could You Possibly be a Hitchcocko-Herrmannian? (Digitally Re-Narrativising Collaborative Authorship) – by: Steven Rawle

Perhaps the most immediate surprise when considering the topics discussed in this collection is the lack of information and analysis about Herrmann’s first collaboration with Hitchcock (The Trouble with Harry). It would seem that their first collaboration would be of special interest, and the book does provide some general information about Lyn Murray’s initial suggestion that the director work with Herrmann (including excerpts from Murray’s personal journal), but the score for The Trouble with Harry is largely ignored. What’s more, the book neglects Herrmann’s wonderful score for the The Wrong Man—which is one of their most interesting collaborations.

Those looking for a biographical account of the Hitchcock/Herrmann relationship will likely be disappointed. What these pages offer is scholarly examination of Herrmann’s music and how his scores affect the finished film. Anecdotal information is only given as a means to contextualize the theoretical analysis or to provide support to the arguments being made. The result is useful (especially to other scholars), but average cinephiles will be less enthusiastic—especially if they do not already have a rudimentary knowledge of music.

One thought on “Book Review: Partners in Suspense”