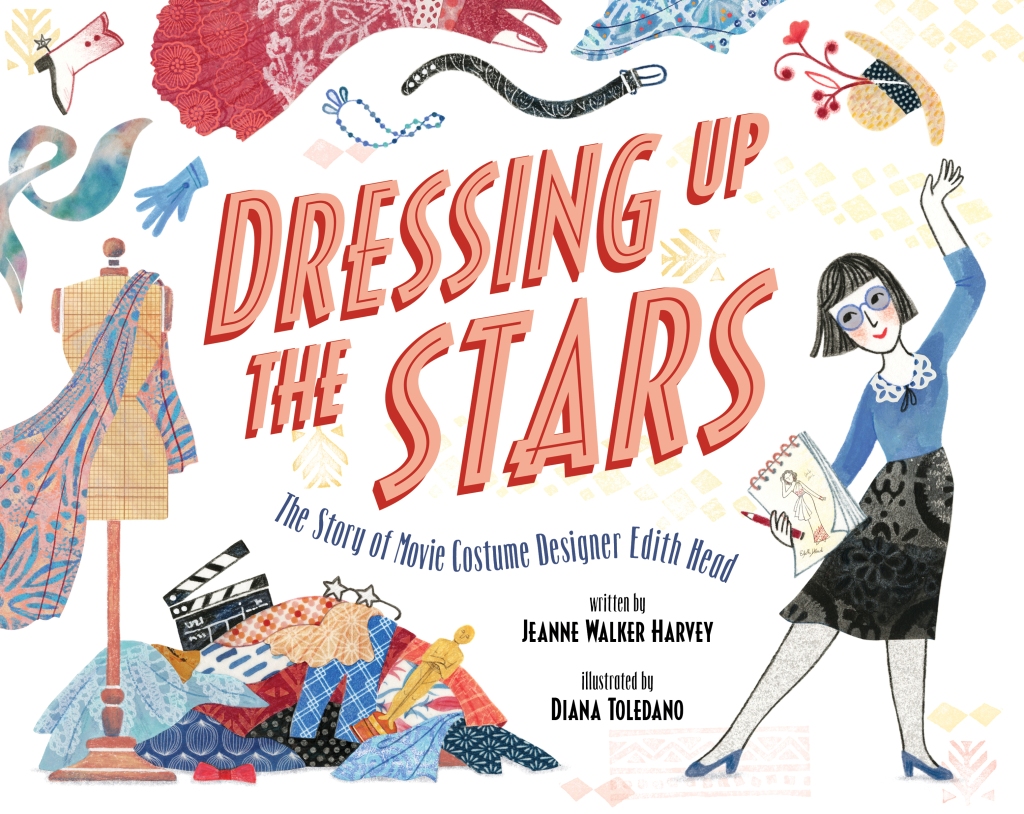 A Conversation with Jeanne Walker Harvey

Beach Lane Books is about to release an unusual new children’s book entitled “Dressing Up the Stars: The Story of Movie Costume Designer Edith Head.” The book (which is recommended for young people aged 3-8) was written by Jeanne Walker Harvey and illustrated by Diana Toledano.

Harvey studied literature and psychology at Stanford University and has worn many job hats, ranging from being a roller coaster ride operator to an attorney, a middle school language arts teacher, and a long-time docent for school groups at the San Francisco Museum of Modern Art. She is the author of several other books for young readers, including the picture book biographies “Ablaze with Color: A Story of Painter Alma Thomas,” and “Maya Lin: Artist-Architect of Light and Lines.” Jeanne lives in Northern California.

Alfred Hitchcock Master was recently afforded the opportunity to interview Harvey about the book.

AHP: Could you describe “Dressing up the Stars” for our readers? What makes this book unique in comparison to others in your opinion?

JWH: First of all, thanks so much for inviting me to talk with the readers of­­ Alfred Hitchcock Master about my new book! “Dressing Up the Stars: The Story of Movie Costume Designer Edith Head” is a picture book biography that tells the story of how Edith, a shy girl living in remote mining camps, became one of the most legendary costume designers in Hollywood. She always knew she wanted to move to a place full of people and excitement. And even though she didn’t know how to draw or sew costumes, she talked her way into a job sketching costumes for Paramount, the Hollywood movie studio. With talent, perseverance and dedication, she became the first woman to head a major Hollywood movie studio costume department and went on to win eight Academy Awards for best costume design (more than any female has received).

The book is unique not only because there aren’t any other children’s books about this iconic costume designer, but there are relatively few books about designers. I think many people know about Edith Head as a famous designer, but few may know about her childhood which shows the early glimmerings of her creative talent.

AHP: This does seem a very unusual subject for a children’s book, but it works quite well and should certainly capture the interest of young readers. How did the idea to write a book like this about Edith Head germinate, and what challenges did you have to overcome to bring it to life?

JWH: Oh, thank you for that compliment! I hope readers will be as captivated with Edith Head as I’ve always been. I was inspired to write this book because as a child growing up in Southern California, I would watch on TV the Academy Awards being filmed in nearby Hollywood. My mom and I would look for the easily identifiable Edith Head with her round dark glasses, blunt haircut and stylish gowns she designed for herself. I’ve always loved classic movies with wonderful costumes, and I thought she would be an interesting and inspiring person to feature in a children’s book. And the more I learned about her, the more fascinated I became.

I think one of my biggest challenges writing this book was to narrow down the storyline, the through line, to show Edith Head’s creativity, determination to succeed, and resilience. And that meant not including many nuggets of interesting background information about her, more than I could include in a picture book. For example, I never realized that Edith initially wore dark glasses so that she could see how costumes would appear on the screen when they were filmed in black-and-white. She continued wearing them, realizing she had established a distinctive look with those dark glasses and short bobbed hair. And as I’m sure your readers know, Alfred Hitchcock particularly favored working with Edith Head. But I didn’t realize that they worked on eleven films together! They were a good pairing because they both had a similar taste in clean lines, sharp tailoring and a careful use of color. For example, Hitchcock required Edith to limit Tippi Hedren’s wardrobe to shades of green and blue for The Birds. I live fairly near Bodega Bay, California, where so much of this movie was filmed. And whenever I drive by the school, I clearly envision Tippi’s distinctive green dress that she wore when she and the children are running away from the attacking birds. Six copies of that green suit were made for the filming of the movie, as some had to be distressed after the bird attacks. Tippi once said, ‘There are wonderful designers who make you look good, very elegant. But Edith taught me that you not only design to make a person look according to their character, you have to make sure the person can do the action.’ I was also interested to learn that Hitchcock hired Edith to design a personal wardrobe, all in black and white, for Tippi to wear to press conferences and premieres of the movie. And each outfit represented a different bird which I’m guessing elicited a lot of discussion.

AHP: Yes, I believe that Hitchcock’s collaboration with Head was one of the most interesting. He liked to hold on to the collaborators who were able to consistently give him what he wanted or needed, and Head was able to actually improve upon his expectations (which was a considerable accomplishment).

This is a unique opportunity to ask a question that I’ve been curious about since I was a child.

These books seem to be equally dependent on the text and illustrations. In fact, it seems to me that there is almost a dance going on between them with one element constantly informing the other.

Which comes first? What was the collaborative process between you and Diana Toledano?

After my picture book text is acquired by publisher, then the art director and editor choose and hire an illustrator that will be a good match for the text. Often the author has little or no contact with the illustrator during the process of creating the illustrations for the book. However, in the case of “Dressing Up the Stars,” I had some wonderful interactions with Diana Toledano about some of the specifics for the illustrations. For example, I knew exactly which theater Edith Head visited as a high school student in Los Angeles — the Million Dollar Theater. And I could find photographs of the theater for her.

The creation of a picture book is truly a collaborative effort. I appreciate everyone at Beach Lane/Simon & Schuster who worked on this book. I feel so lucky I had opportunity to work with the wonderful editor Andrea Welch and Danielle Collins. I’ve always thought that a book should list all the people involved with the creation, production and marketing of a book, just like the credit listings for a movie.

AHP: It’s actually a surprise to learn that they are done separately. I wouldn’t even know where to begin! That is quite an achievement.

I think one reason the story works so well in this context is that you root it in Head’s childhood. What lessons do you hope young people will extract from Head’s story?

JWH: I hope young readers are inspired by Edith Head’s passion and perseverance to follow a creative life. She explained how challenging it was at times to be a costume designer with all the conflicting interests. As she said, the movie star knows what they want to wear, and the producer and director have specific ideas. The sound person says the rustle in the dress is too loud, and the color consultant says plaids and tweeds don’t work onscreen. The art director says you can’t use blue because the interior of the room they’ve created is blue. The set director says you can’t use a black dress because they’ve planned a black sofa, and the front office says the costumes will cost too much. But Edith said, despite all of that, she knew she wanted to continue as a designer because she had experienced the “flavor and fever” of designing just the right costumes for particular characters.

AHP: I remember you saying that you would watch to see Edith Head at the Academy Awards with your mother. Her style and appearance were particularly distinctive.

JWH: Yes! And ever since then, I’m always eager to see if the credits in classic movies list her name. I was excited when I found a 1959 book, “The Dress Doctor,” which Edith Head wrote (and that includes sketches in her wonderful pen and ink style). For my research, I always seek primary sources, such as autobiographies and interviews. And in “The Dress Doctor,” Edith talks about her childhood living in remote mining camps and wishing she was instead somewhere full of sounds and excitement. I was drawn into following the path of her career leading to her success in bustling Hollywood. I also liked that she shared her philosophy of not only designing costumes in the movies but dressing in our own lives to feel our best. She definitely exuded a no-nonsense personality at work in her neutral tailored clothes. But at home in her Spanish style adobe house full of her collections of Mexican pottery, tapestries and jewelry and a menagerie of pets, she was warm and affectionate and wore colorful patterned clothes. She dressed for her different roles! 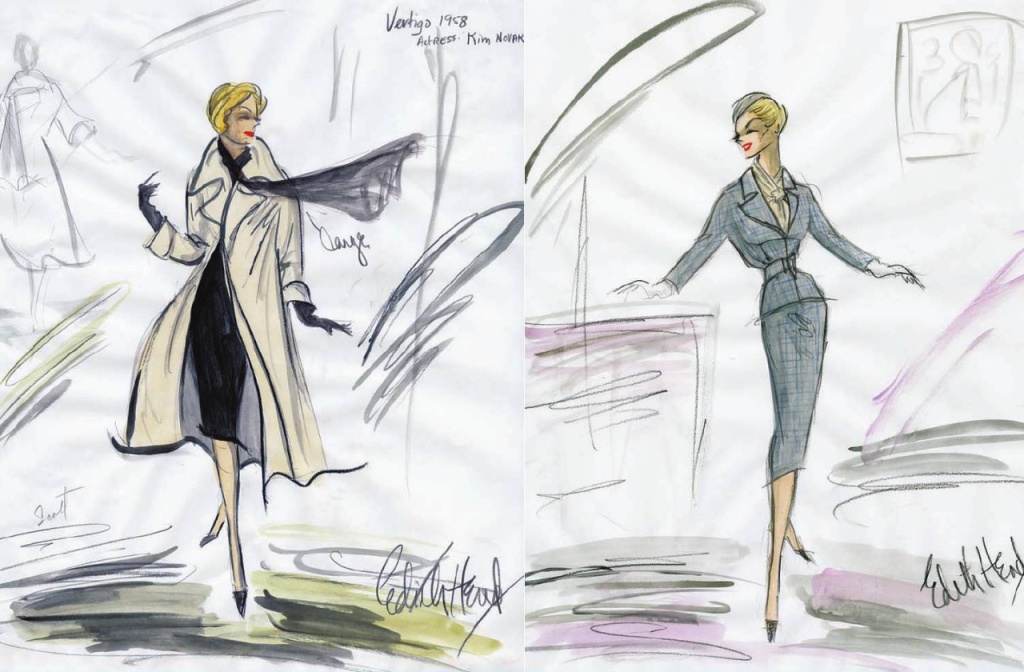 AHP: Do you have a favorite Edith Head creation?

JWH: Too many to list! But thinking of Hitchcock movies, I’ve always been impressed by the two sets of costumes that Edith Head designed for the characters Madeleine and Judy, both played by Kim Novak, in Vertigo. The costumes are so integral to establishing the very different personalities. Edith once said that “to be a good designer in Hollywood, one has to be a combination of psychiatrist, artist, fashion designer, dressmaker, pincushion, historian, nursemaid, and purchasing agent too.” She also said, “I don’t usually get into battles, but dressing Kim for her role in Vertigo put to the test all my training in psychology.” Kim Novak didn’t like the gray confining suit Edith Head designed per Hitchcock’s instructions, but Kim came to realize this feeling of limitation in a color reminiscent of the San Francisco fog actually fit the character perfectly. And, of course, I love love love the gorgeous dresses Edith Head designed for Grace Kelly for Rear Window. Apparently, Hitchcock’s instructions to Edith were that Grace was to look like a piece of Dresden china, nearly untouchable.

AHP: I agree that her work on Vertigo was a huge asset to the film. Hitchcock liked to tell his films visually if at all possible, and this wasn’t limited to plot. His characters were established visually as well, and Head’s work allowed him to do this. I also love her designs for Rear Window — and pretty much everything she ever designed for Grace Kelly — but I remember being particularly blown away by the golden dress in To Catch a Thief. 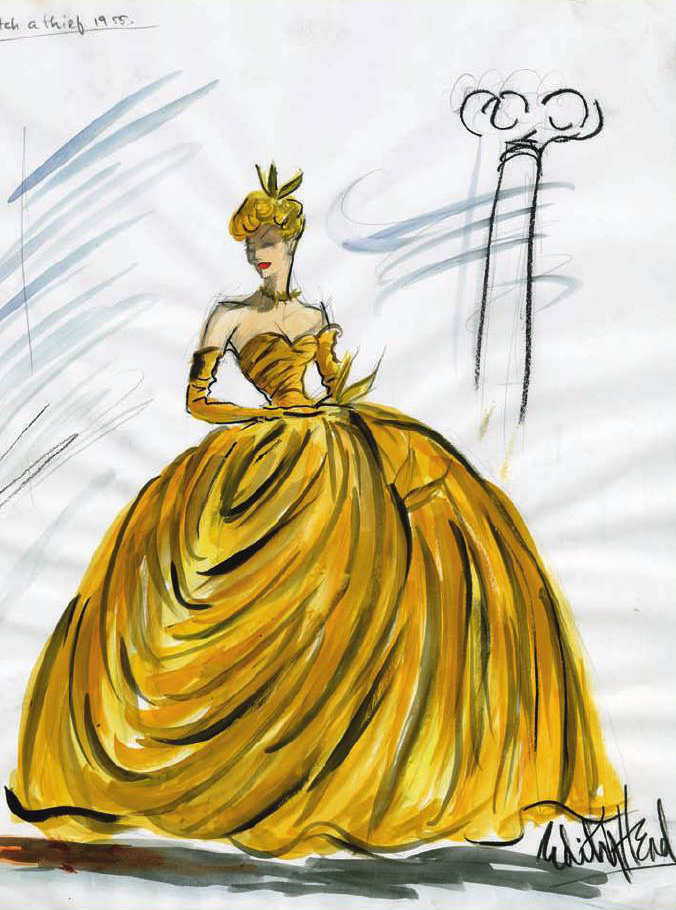 What’s next for you? Are there any other subjects that you are itching to write about?

JWH: I’m always in different phases of book projects — pondering topics, researching, writing, revising, sharing completed books with readers, and back to revising some more. So, I have many projects in different phases, all focused on interesting, artistic, inspiring people. I’m very excited that I have another picture book biography about a creative person which will be announced soon. Stay tuned!

AHP: Wonderful! Thanks so much for sparing time to talk about this great book.

JWH: Thanks so much for inviting me and asking such interesting questions. Such a pleasure for me! And I hope your readers enjoyed learning the backstory of Dressing Up the Stars: The Story of Costume Designer Edith Head.

3 thoughts on “Book Interview: Dressing Up the Stars — The Story of Movie Costume Designer Edith Head”